My brother was addicted to Power Rangers when he was little. My cousin Mason was obsessed with dinosaurs as a baby. Two years ago, Kaevon was into Spiderman, this year, it’s all things Sonic. Kamryn however has been a die-hard Batman fan for sometime now; until three weeks ago.
I thought Batman was black like me Momma.
Kamryn has always been the quiet child out of the two, always in his own world, never too observant on things. He owns a few Batman action figures, has a Batman t-shirt that he’ll wear anywhere regardless of how many pasta and juice stains saturate it and a Batman hoodie with ears that makes him feel like he’s the Caped Crusader himself. Despite all of these things, Kam’s never paid attention to the color of his favorite superhero until a segment on television the other day on the value of comics, where the narrator showed a comic from the 1950’s with a Caucasian man in Kamryn’s favorite costume in the world.
I tried to keep my face in my tablet but Kam’s persistence in knowing why the person he looked up to didn’t look like him pulled at me. He wanted to know if Bruce Wayne has always been a white man.
Which superhero looks like me Momma? I can’t be Batman now.
Kamryn called me a liar. He reminded me of the words of encouragement I gave him for as long as he could remember about him being whoever he wanted to be. He was angry and upset because he couldn’t be someone he didn’t look like. One clip on a comic book’s value made him question his worth. In all of his frustration and obvious hurt, I reminded him that he was a cool kid just because of his color. He couldn’t understand now and his history classes later on in life surely wouldn’t tell him, but his people were once Kings and that was definitely doper than being a superhero.
But no four-year old is trying to hear that.
I could tell him about Green Lantern, Cyborg and Black Panther but he’ll see Green Lantern was also a white man in movies, he’s not fascinated by the Justice League member, and he’s not interested in someone he’s never seen on television, and so I’m left to ask, who is the superhero for my Black sons? Who can they look up to that resembles them in color and most importantly, who is fighting for them?
The last nine days on Twitter has been hard but very necessary, scrolling through and not turning a blind eye to the hashtags, #Ferguson and #HandsUpDontShoot which brings to light the injustices brown and Black people still face in America. After seeing images of a dead child on my timeline over twenty times in a matter of five minutes and eerily similar photos from the Civil Rights Movement fifty years ago, I needed to spend some time offline. Then what happens? My child comes home and shows me his arts & craft project of the week from camp – his hands up. In red. 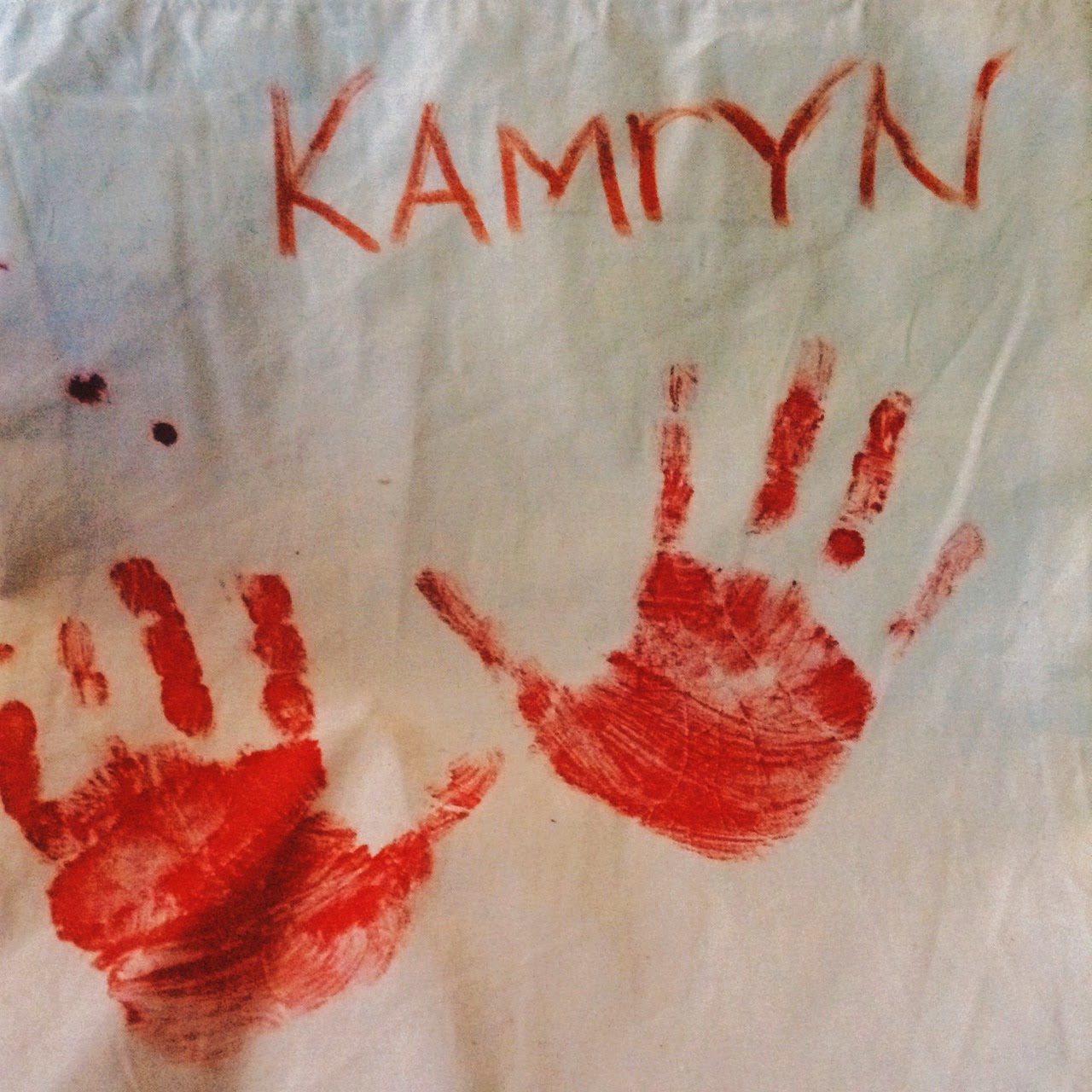 And I’m reminded that I can’t run from these things. My children can’t run either for as long as they’re breathing while Black in the United States of America, because there’s a high possibility that if they run they’ll get shot. If they wear a hoodie, they’ll be shot. If they play their music too loud, they’ll be shot. If their hands are up or handcuffed behind their backs, they’ll. be. shot. Do I tell my four- and five-year old that there are people fighting for them, people they can call superheroes, but the media calls thugs? Do I tell them fighting for your rights and what’s right is synonymous with “rioting” in America? Do I tell my sons that there’s a chance there will be a pound sign before their names for as long as we live here? I pray long and hard that I remain @KaeNdKamsMom, never the subject of a #PrayForKaeNdKamsMom trending topic. But the probability is high, the odds are stacked against them.
Who saves us? Who are our superheroes? Who protects us when the authorities are against us? I ask Kae and Kam their toddler thoughts on police and they think there are no such thing as bad cops. I don’t want to ruin their realities and yet I wonder, when do I burst that bubble of innocence and wake them up to reality? In a few years, their father and I will have to sit them down and explain the severity in ‘hands up, don’t shoot’ for boys of their color but for now, I’ll let them lift their hands up in the air for reaching for junk food and the sky and for their parents – the only superheroes they know right this moment.

There has been a problem with your Instagram Feed.
Error: No posts found.